Please read our detailed and informative SPACE STATION REPLICA FAQ page by clicking here.   It will answer most of your questions in detail.

WonderWorks™ inc. has been creating and renting reasonably accurate replicas of the Space Station since the 1980's.   Currently, we have three Main Modules and a Space Lab Section available as rentals.   The pictures below are of the Module featured in many films such as DAY AFTER TOMORROW™ and BBC's SPACE ODYSSEY™.    In some cases, the cabinets are actually functional as is the lighting.   WonderWorks™ inc. has also built other habitats such as the Ergonomics SpaceHab module used by NASA at their Eames Research Facility in California.   These modules are also available for sale or rent  to museums or exhibition groups.   CLICK HERE For More Space Station     We also have appropriate interior SPACE SUITS and casual wear for the astronauts including form-fitting contemporary LEO suits, click here.

One of 3 configurations of ISS

Window On The World is an extra

plain panel.  Ryan is in our White 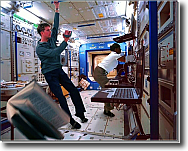 ISS with curved end wall during

setup prior to lights and detail

ISS as used in Commercial.

This MARTIAN poster in LEO

when rented with Sets.

Appropriate for inside ISS or for

EVA outside.    Poster courtesy of 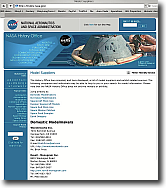 WonderWorks is one of the few

of its' type listed on Nasa's Own

are available for rent to recreate

portions of an exterior similar to

that of the ISS.   The Cupola has

been built from our molds 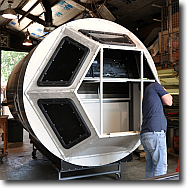 Not currently available except as

portion of module under

Exterior K panels are available for

rent to create portions of the

Most of our sets now have built-in

drawers which can contain spare

has proven to be useful to Art

iSS Airlock detail is wild and can

be placed anywhere.  Hatch can

be made functional for extra fee.

PANEL as part of full set.  Not

one half day maximum with a

up. Generally, this takes two of

our crew and two from

that can be added onto the end

of ISS as an extra cost item.

The Packing here shows how

ready to be shipped.   The savings

in shipping cost and time are

resorting to wires, Rigging, or

astronaut on a rig.  We can help

you plan your shots, because we

have nearly 40 years of

experience doing just this sort of

Some set dressing is available but

very little such as this specially

built Computer that is featured

Some set dressing is available

such as this industrial looking

laptop as frequently seen in the 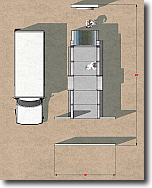 Truck as Scale reference next to

PARTIAL for Commercial.  X and K

Reference as to one possible

setup.  An SKP file can be

included.  An SKP file can be

Assembly instructions can be

Additional materials may be

Education For More Than 40 Years!