Since it's inception in 1977, WonderWorks inc.™ has created, rented and sold accurate replicas of the Space Shuttle as well as fantasy science fiction space craft for TV and film.   Many  of our replica rentals use real space flight hardware modified to be user friendly for production companies.   As such, expensive Set Technicians or special equipment are not needed on location during filming.   Please read our detailed and informative Space Shuttle Rental FAQ by clicking here.

Every major space film in the past 40 plus years, which has featured the Space Shuttle, has done so using our replicas.   A UK reality show, "Space Cadets - Episode 1 of 6", had contestants believe for five full days that they were in space and in the real Space Shuttle.  Rarely have film sets and props had to perform for so long without a problem.  No one can top that caliber of realism and functionality!   See it here at Space Cadets - WonderWorks    We DISCOUNT our Space Suit rentals when used with our sets.  We have created a Space Capsule of our own design with an interior similar to CEV, Orion, SpaceX Dragon, etc. which are real space ship/craft being developed as a replacement for the Space Shuttle.    We have also created a second ISS (International Space Station) with Exterior, a State-Of-The-Art high-end Shuttle Cockpit and ISS Cupola with more detail and functionality than ever that are now available for rent. 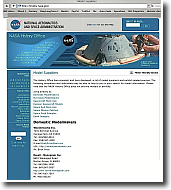 WonderWorks is one of the only

as shown elsewhere on this site.

Images are unique (in pairs) and

pre-programmed for ease of use.

Glass Shuttle Cockpit - As it looked

on the final flight and currently

in our mockup.   Challenger

as seen in Space Cowboys.   Image

Shuttle Cockpit as seen in Space

Cowboys with Stretch Section in

Shuttle Cockpit Rental as used in

in Long Beach staged as

in front of power station. 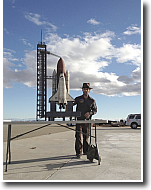 at Mojave as foreground miniature

shot.   Shot with iPhone but still

BBC View out of Modified Cockpit

Windows.  Used in this fashion in

Panels may be customized for a

Shuttle Cockpit Rental as seen in

and Space Camp Movies.    NOT

display in the award winning

produces models for film use.

in pieces.   Note how the parts can

be moved around to nest one into

the other for shipping and storage.

This is a frame taken from a time

lapse video of the WW shuttle at

assembled in 22hrs.  Everything

was designed to fit into standard

less than a day later, under

Professional lighting is a key to a

On the set of UK's Space Cadets

to the cockpit for ease of filming.. 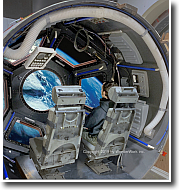 1-7 Person Crew Capsule (Based on

Layout and Approximate  sizes of

Stretch Section is now included in

basic rental at no charge.

Scan is just one of hundreds of

WonderWorks prior to 9/11 for use 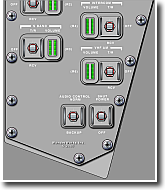 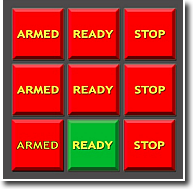 used in conjunction with